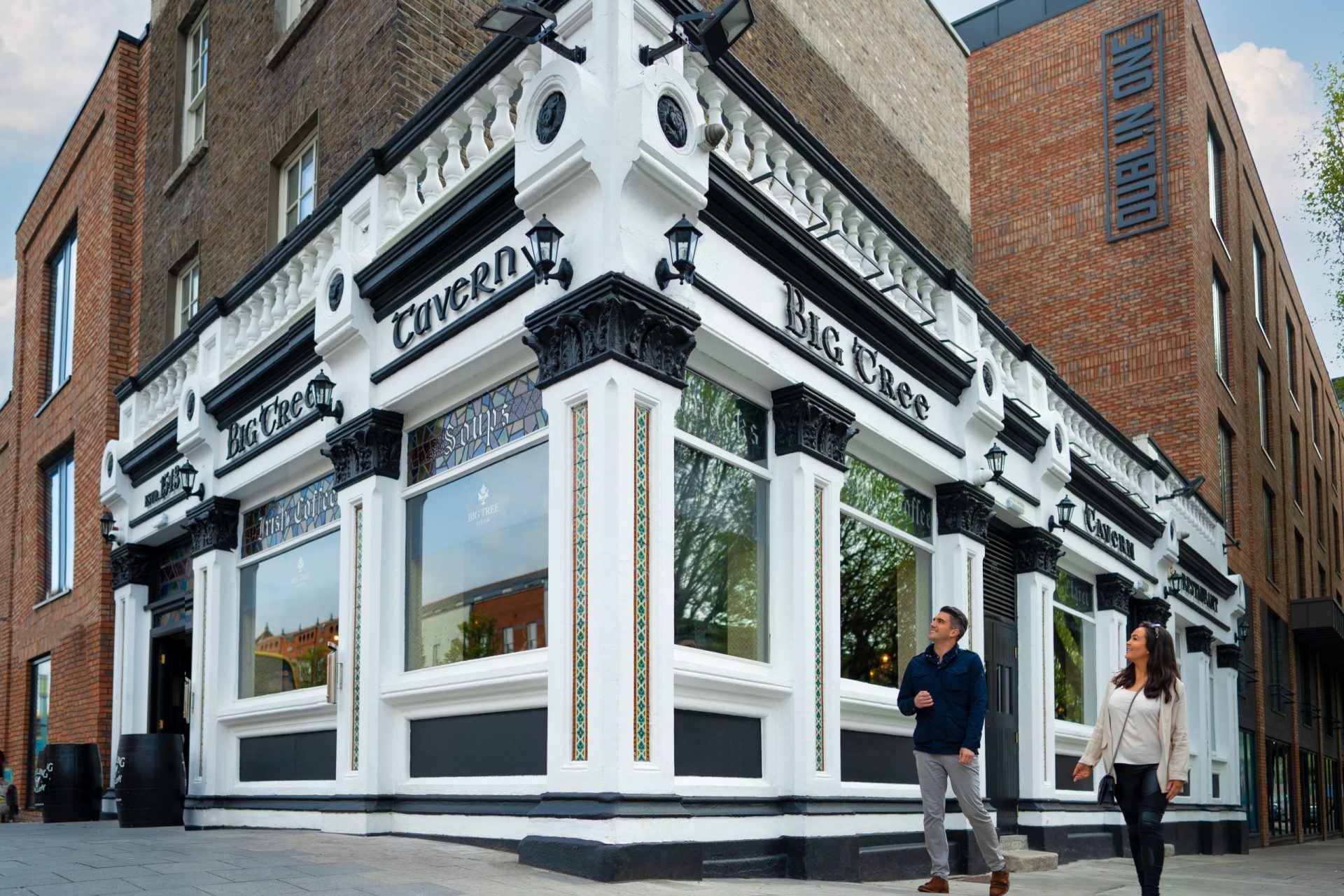 The Big Tree, the iconic sporting pub on Dorset Street, reopens on Friday February 25th after a significant remodelling.

Now part of DUBL!N ONE, a brand new 163-bedroom hotel on Lower Dorset Street in Dublin 1 that opened on February 4th, both The Big Tree and the hotel are managed by Cliste Hospitality.

“The iconic Big Tree pub is now part of DUBL!N ONE,” says Paul Fitzgerald, CEO of Cliste Hospitality, “and we are proud to be custodians of this landmark hostelry that has been a feature of the Dublin pub landscape for generations. Only an 8-minute walk from Croke Park Stadium, we are looking forward to The Big Tree being a part of the quintessential match day experience again, as well as becoming an integral part of and contributor to our local community and neighbourhood here in Dublin 1.”

On the corner of North Circular Road, which was laid out by the 1780s, and Dorset Street Lower, a pub or inn has reportedly occupied this site since 1543. It grew to fame first as the Rose Tavern, mentioned in historical accounts of those times, and where Huguenot settlers are reported to have created Ireland’s first Florists’ Club and held their meetings. The pub derived its current name in the aftermath of the 1798 rebellion where five men, captured by militia, were sentenced to death by notorious alderman and judge, John Claudius Beresford, after a minute-long trial, and hung from a big tree nearby. The tree that they were hanged from became known as the Big Tree and over the years the tavern also became known by the same name. The building once also operated as a grocery and served as the Petty Sessions Courthouse for Drumcondra in the late Victorian period.

The reopening of The Big Tree and DUBL!N ONE creates 80 jobs in total in the Dublin 1 area, bringing Cliste Hospitality’s group workforce to over 1,300 colleagues. The group also successfully manages the Radisson Blu Hotels in Cork, Limerick, Sligo and Athlone, The Tullamore Court Hotel, The Fairways Hotel Dundalk, The Kilkenny Hibernian Hotel, The Hillgrove Hotel Monaghan & the 5-star Muckross Park Hotel in Killarney. Just last week Cliste Hospitality announced the purchase of The Viaduct Inn, the pub and restaurant on the Old Bandon Road, with views of the famous landmark after which it is named — the Chetwynd Viaduct.

Listen - Sean O’Driscoll of Cliste Hospitality: Inside Business with Ciaran Hancock
As part of our continued growth in the hospitality market, we are delighted to announce the...
#Hospitality #Hotel Management #Learning & Development #Management #Strategy Builds #Technology #The Community
New Development

Cliste Hospitality Reopens The Viaduct Inn
As part of our continued growth in the hospitality market, we are delighted to announce the...
#Executive Team #Innovation Team #Investments #Learning & Development #Operations #Our People
OurPeople